Hello there,
here are a couple of birthday cards made for some male friends - who as we all know are often difficult to make for. Both are interested in cars so I chose that as the theme.

Both cards were made using stamps from Creative Stamping magazine, I just changed the colours I used and tweaked the design a bit. I used to be a bit worried about stamping as the image didn't come out very well - that was until I discovered stamping platforms! I bought the Misti at a show having had a play with it there, however as I quite often make larger cards I wanted one with a larger base so I bought the Tonic/Time Holtz one. Then a won a set of We R Memory Keepers tools in a competition which included their stamping platform, so now I'm really spoiled for choice, and my stamping skills have improved enormously with using them.

Unfortunately I got the age wrong on the 65 one - but as he was older than that I think he was quite flattered so I got away with it! 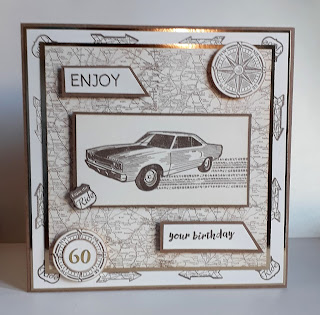 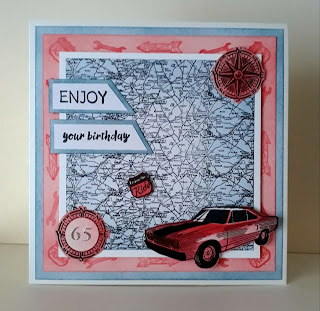 I hope you like the two variations of this card, please leave me a comment if you've time as I do really appreciate it.