Fairy tales - Bambi, a Life in the Woods 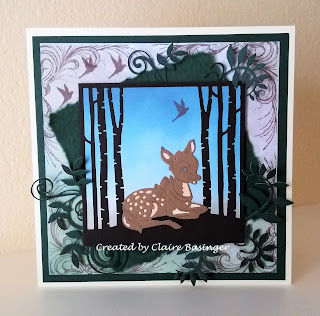 this is the card I've made for the Fairy and Unicorn Challenge for April, which has the theme of fairy tales. I've taken Bambi, a Life in the Woods written by Felix Salten in 1923, and which the famous Disney movie Bambi was based on.

I've not posted since the last challenge - been up to my ears decorating! I had a couple of false starts with this one as my printer has been playing up, I finally managed to print the background out for this and have been able to cover up the printer deposited splodges.

I started with an 8 x 8 cream card blank, on to which I put a green mat. I printed a background from the Daisytrail Fantasy Fairies digikit, and stamped swirls using a Sheena Douglas stamp I got free in a magazine. I stamped a few bird silhouettes on the corner of the background. I ripped a square from green mulberry paper and put it on the card front at a jaunty angle.

I die cut the trees from brown card, it's actually the Apple Blossom Woodland Scene die but with the stag removed from the middle and replaced with a brown faun, not sure where that die came from though. I've got some distress backgrounds so used one of those as the background and stamped another bird silhouette. I put this on the card front on top of the green paper using foam pads.

I then cut foliage from green card using the Tonic Royal Fern die, and tucked it around the central image to finish it off.

Thanks for stopping by, if you've time to leave a comment that would be great.