Hello there,
another big gap between posts - been away on holiday. This is a card made for a close friend - bet you can't guess his name! I started with an 8 x 8 cream card blank and matted and layered it with brown card and beige script paper, which I'd also wrapped with cord before attaching them to the card blank. I used the Tonic Pretoria Alphabet dies and cut 2 set sets of letters one from brown and the other from cream, then inset the cream letters into the brown outer frame. I cut the Tonic Wild Brier Border Topper die set from brown card and inserted the matching sentiment.

I used the other sets of letter on a gift tag so nothing was wasted. 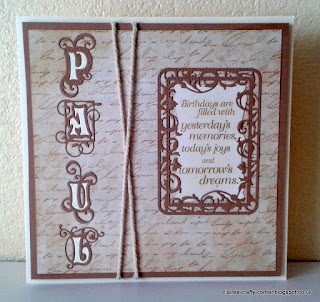 Email ThisBlogThis!Share to TwitterShare to FacebookShare to Pinterest
Labels: Tonic

Hello,
it's been a few days since I posted a card as I've been busy with house chores and also been away. I was lucky enough to win a card from Create and Craft made by Jodie Johnson from Tonic, and this card is inspired by that card. I used a 7 x 7 cream card blank and found some double-sided papers which were in matching colours. I matted one layer on to pink card, and then cut the top layer across the middle to create curl backs before matting it on to the patterned paper. I used the Tonic acorn leaves to cut 2 in pink card and 2 in pale blue, used the Tonic Floral Frame to cut a background matt in pink and then the detail in blue card. I cut a pink butterfly using the Tonic Rococo Butterfly, glittered it up and used some liquid pearls on the body. 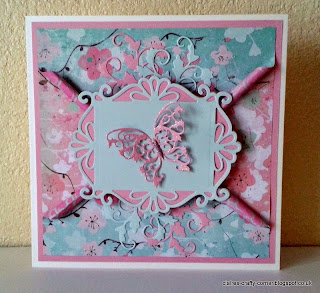 I'm quite pleased with the result, particularly as I found creating the curl backs a bit tricky.

This is the card that Jodie made. 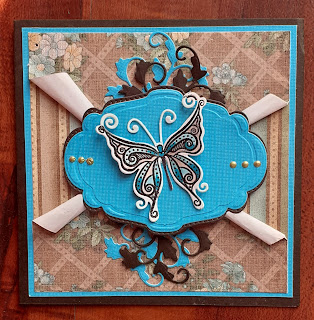 Email ThisBlogThis!Share to TwitterShare to FacebookShare to Pinterest
Labels: Tonic

this is a card I made for one of my nieces. I used the Spellbinders M-Bossabilities Imperial folder design A for the white background, matted the two pieces onto red card with a row of black gems to hide the join. This was matted onto white, then black and then on a white 8 x 8 card blank. I used  dies from the Moroccan Accents and Moroccan Motifs die sets cut from red, white and black card stock, layered up with foam pads, put the corners in the top corners and black gems in the bottom corners. I finished it off with a Craftwork Cards sentiment, a red bow and a black dazzler. 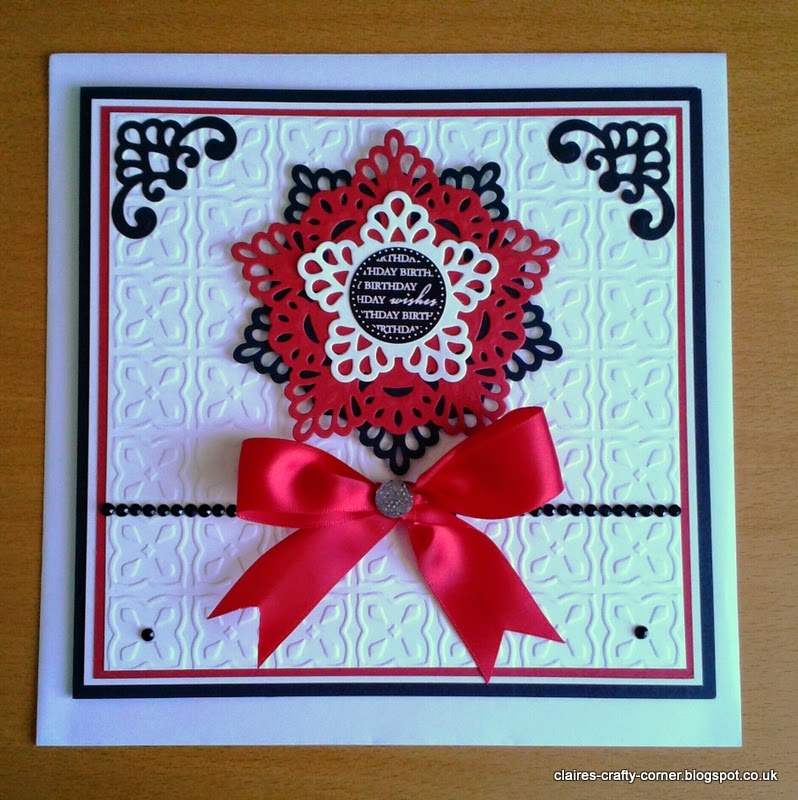 Thanks for stopping by, any comments are gratefully received.

Hello there,
today I'm sharing a card that I made for a friend's birthday. I used the Spellbinders Gold Elements One dies  and cut two corners from antique gold card which I matted onto opposite corners of cream card. I then cut tow of each of the flourishes and one of the main motif and put them all along the diagonal. I matted this onto an antique gold mat and then onto an 8 x 8 white pearl card blank. I finished it off with some gold pearls and a Craftwork Cards sentiment in the middle. 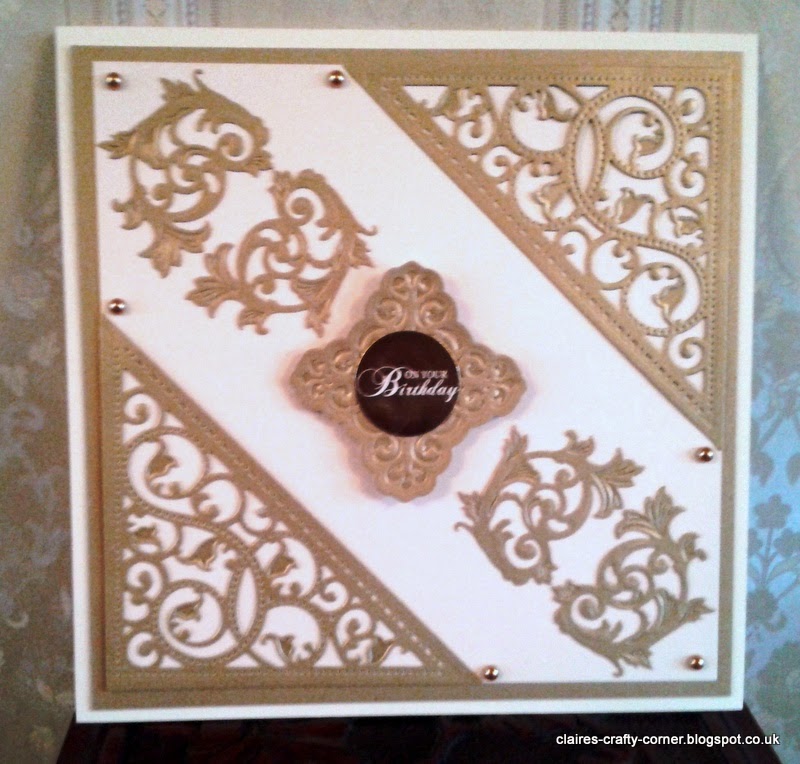 I hope you like it, and if you'd like to leave any comments I'd be really grateful.

this is a birthday card made for a male friend, I didn't want anything too fussy so decided to use fleur de lis as the main design as it has a more masculine feel to it. I used the Spellbinders Ornamental Iron M-Bossability folder embossed on to white card for the background and hid the join with the Fleur De Lis Accents border cut from navy card, then put the Fleur De Lis Corner Accents cut from navy card in the top two corners. The white background was matted and layered on to navy card and then on to a white 8 x 8 card blank. I used the Labels Twenty die cut from navy card and a Spellbinder/JustRite stamp for the sentiment, stamped in Memento Marine Blue. It was finished off with navy Craftwork Cards Card Candi in the bottom corners and above the border. 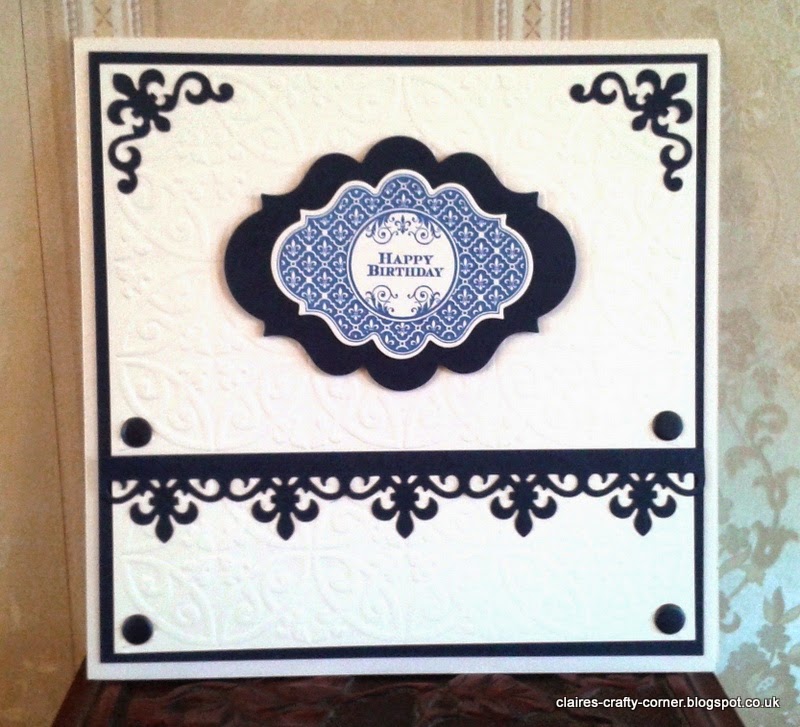 I think it has a masculine feel about it and hope you think so too. Thanks for stopping by, as always any comments gratefully received.

Hello there,
this is the first card I've made using acetate, it's the snowfall acetate from Hunkydory which I've seen demonstrated a few times, plus items from the Snowy Animals paper kit.

I started with an 8 x 8 card and then cut most of the front off just leaving a 1.5 inch strip on the left side. I took some snowflake backing card and layered it onto silver mirri to cover the inside of the card, Then I cut 2 panels 1.5 x 8 inches of mirri and layered panels of the snowflake card on to them. I cut an 8 x 8 piece of snowflake acetate and glued the 2 panels at each end then glued the left end to the flap on the front of the card, this covered the glue on the acetate, and then I glued a panel of white card on the inside of the other panel to cover the glue.

Inside the card a glued a large rabbit topper and a sentiment to the middle so that they showed through the acetate. I finished the front off with a snowflake punched from silver mirri and three silver Card Candis. 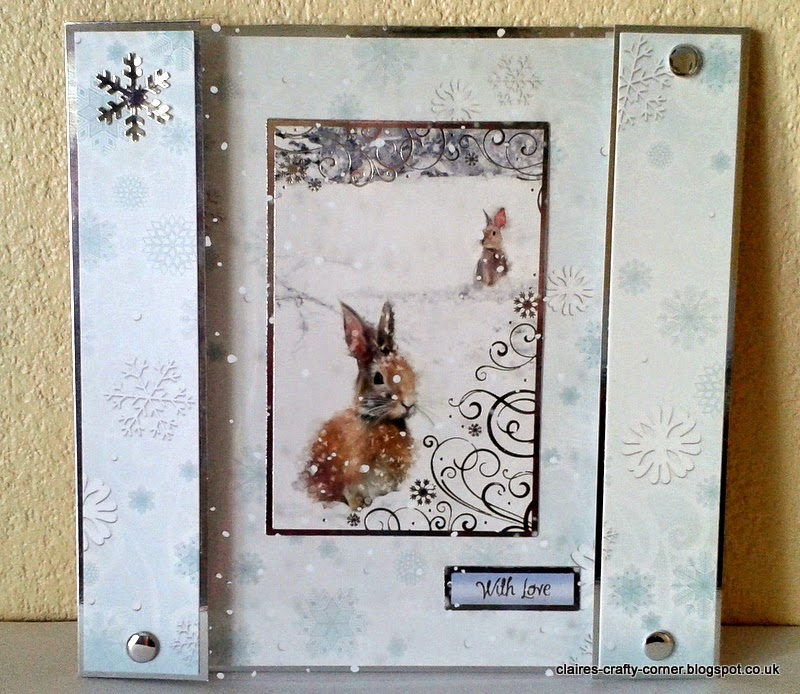 I think this card would work as a winter birthday card or a non-religious Christmas card. If you'd like to leave a comment I'd be glad to receive it.

Another Whirl About card

this is another card made from the Spellbinders Whirl About Cut, Fold and Tuck die for a friend. I cut the dies from two-tone, double-sided lilac card which I matted onto lilac mirri. I used a white 8 x 8 card blank and matted and layered it with lilac patterned paper and lilac mirri then placed the die cuts onto the card. I used Craftwork Cards Card Candi in the centres of the smaller die cuts and a sentiment in the middle of the large one. I finished it off with a lilac and silver ribbon bow in the final upper corner. 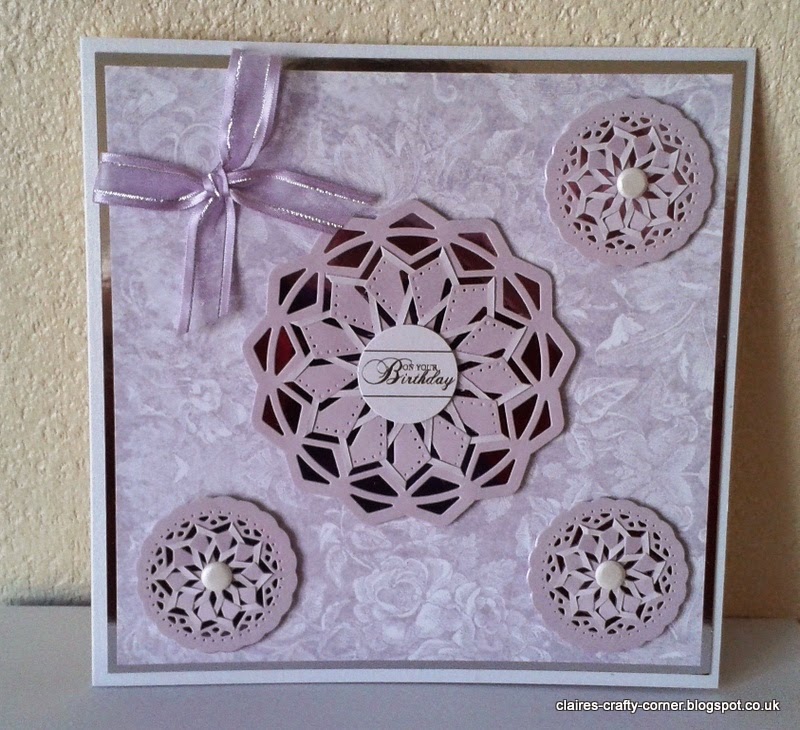 Thanks for stopping by, any comments gratefully received.